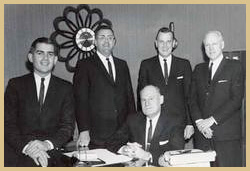 The Eddy Funeral Home has been serving Jamestown and the surrounding communities since Porter W. Eddy and Herbert Procter returned from the Spanish-American War in 1905. They purchased the Adam Furniture Co. at 108 1st Avenue South and operated the furniture store on the main floor and the funeral home in the basement, and later on the second level.

In 1925, Eddy purchased Procter's interest after his retirement.

Paul W. Eddy, Porter's son, began a friendship with Truman E. Risbrudt while attending the University of Minnesota. Eddy returned in 1931 to serve as President of the Eddy Funeral Home and Risbrudt followed a year later to serve as Secretary/Treasurer. The funeral home built an new facility in 1931 at 226 2nd Avenue SW and operated there until purchasing the present location from Willett Mortuary in 1952.

Through the years, Eddy Funeral Home has employed the most empathetic and thoughtful morticians known to the industry.

Curtiss O. Goehner gained his insights in 1955 while attending Jamestown College. He graduated from the University of Minnesota and returned to join the staff.

He and Tordoff purchased Eddy's interest in 1976, and Tordoff sold his shares to Goehner in 1979.

O.J. Stocking was associated with the firm from 1973 until retiring in 1989. Jason Skiftun was a member of the staff for 8 years.

Garin Martin is a native of Sioux Falls, SD and graduated from Dakota Wesleyan University and the Worsham College of Mortuary Science. He has been a licensed funeral director since 1994 and began his employment at Eddy Funeral Home in 2003.

Steve Laber has been associated with the funeral home since 1986 as a non-licensed funeral director.

As the Eddy Funeral Home enters the 21st Century, they will be sure to continue a leading pace among the many successful funeral homes in the country by offering personal service to families of all capacities.