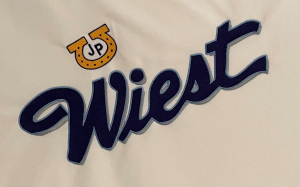 Jon Pierre, best known as JP, was the son of John and Katharina Wiest, born on June 14, 1943 in Harvey, ND.  The fourth child of twelve, he was raised on the family farm near Selz, ND. He attended school at Selz and graduated from Assumption Abbey Seminary in Richardton, ND. Upon graduation, he became a gravel truck driver during the installation of missile sites at Mohall, ND.  He then became a semi driver for Thorsgard Brothers in Northwood, ND. He decided to then become an owner operator of a 1966 Freightliner tractor.  He started his business in March of 1966 and he was trucking throughout the mid-west states. The hours and miles were long & hard.

JP married Judith Marie Axtman on October 10, 1966.  JP needed a co-driver in the truck and she was quickly groomed into filling that role.  JP was a good instructor showing Judy how to master the 16 speed, 4x4, shifting pattern.  The Wiest duo kept those wheels rolling as there were truck payments to be made, work to be done, places to go and people to see. Life was easier with two drivers.

In June of 1969, daughter Denise was born followed by daughter, RaeAnn in June of 1972. Co-driver Judy took on the new title and role of “Mom” and so JP found himself once again recruiting for another driver.  At that point driver #1 was hired, then truck #2 appeared, then drivers 2,3,4, etc. were hired and many trucks followed.  As the years passed, a company was started known as Wiest Truck Line, Inc. employing a staff of over 100 employees over his 48 years in the trucking transportation field. Freight of many kinds was moved all over the United States and Canada. JP then also started a leasing company, Simplex Leasing, Inc. and a freight brokerage company, Cen-Trux, Inc. JP was an active board member of the North Dakota Motor Carriers Association during his trucking years where he made many lifelong friends.  In 2014, retirement was calling and his companies were sold.  JP was raised on a farm and therefore, he always had a love for the ranching life. His rest & relaxation was raising and feeding up to 180 head of buffalo. He was also an active board member of the National Buffalo Museum in Jamestown, ND.  In addition to his hobby of raising buffalo, JP was a member of the Knights of Columbus, Elks, Classic Car Club and Street Machines Club. He was a member of Aircraft Owners & Pilots Association during the 30 years he was a private pilot. JP’s other interests revolved around rebuilt cars and pickups, riding snowmobile, camping, enjoying his Harley Davidson trike, driving around in his pickup, and “ratchet-jawing” with friends and family.  Coffee time with the guys was a necessity to obtain pertinent information that always became fact.  This daily routine became better known as “Psychology Club.”

In lieu of flowers, the family of JP request a donation in his name be made to: Jamestown Regional Medical Center Home Health & Hospice, 2422 20th St SW, Jamestown, ND 58401

To send flowers to the family or plant a tree in memory of JP Wiest, please visit our floral store.